Steve and his farm (Derry Duff near Bantry in West Cork) featured recently in an article written by Kate Ryan of The Echo newspaper.  We hope you will enjoy reading this excellent piece – which really captures the vision and ambition behind the cultivation of aronia and blueberries locally.

MY car bounced along the kilometre-long mountain track towards Derry Duff Farm with excitement.

I have been a faithful follower for a good while, and now I finally get to walk amongst its blueberry fields.

I’m reminded of when I found my first foraging spot for wild fraughans on a nearby boggy, rocky hill and learned about the traditions of Fraughan Sunday.

Those little purple-black berries are Ireland’s native blueberry, also known as bilberries, much smaller and intensely sweeter than their North American cousins. They appear for a just a week or two at the end of July.

On Fraughan Sunday, the last Sunday in July, fingers and lips are stained purple from an early morning well spent berry picking – and eating! 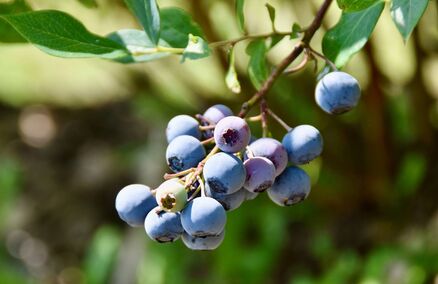 It makes sense that blueberries grow well in Ireland, especially in West Cork, its temperate climate is ideal for cultivation and plentiful bog land. The more I learn about the challenges facing agriculture in Ireland from climate change, the more I recognise the value in working with nature, rather than against it, to farm crops best suited to a particular field or farm, soil and microclimate.

From fighting famine to farming, Derry Duff Farm was established by Dr Steve and Claire Collins. Originally from the UK, they spent decades working with international aid projects. Steve is a medical doctor with a PhD in nutrition, an MBE for his humanitarian work in Africa, and a leading expert in the treatment of starvation. For 35 years, he oscillated between African conflict zones, treating mass starvation of people caught up in war and famine, and living in London, where day to day problems paled into insignificance.

Returning from a particularly difficult period in Sudan during 2004, Steve and Claire escaped to West Cork to decompress, rebalance, and feel normal again. They spent time with Steve’s brother on the other side of a high ridge that dramatically backdrops Derry Duff Farm.

Rumour had it the farm was for sale. Steve and Claire walked the ridge to view it and saw an old, steeply sloping farm carved out of a sheltered hollow in the mountain, vastly overgrown. The connection was instant.

“I found out who owned the farm, an older lady. We struck a deal there and then.”

Since 2005, Steve and Claire have been bringing all 140 acres of Derry Duff Farm back to life. There has been much experimentation – the scientific, enquiring mind never rests – but in recent years there is an increasing need to get serious about turning the farm into a thriving commercial enterprise.

For many years, Steve boot-strapped the financial needs of the farm – including building a beautiful self-sustaining eco-home nestled into the mountain – using his salary from Valid International, a company he founded developing highly nutritious, stable foods deployed in famine-relief. The pouched foods proved incredibly effective; data backed it up and thousands of lives were saved.

It’s clear there is much more to Derry Duff Farm than growing beautiful organic berries. This is a place influenced by a lifetime of work, research and development. At its heart, the farm has an ambitious social mission.

“Working in Africa, I know climate change is real; I’ve been to so many wars caused by migration, caused by diminishing resources that people are fighting for.”

“It’s starting; it’s coming. Populations are rising, soil is being exhausted, phosphate reserves are running out, fossil fuels are becoming unsustainable. There are a huge number of factors pushing us all towards food insecurity. A recent report said the UK is not going to be able to distance itself from food insecurity; this war’s bringing it home,” said Steve. 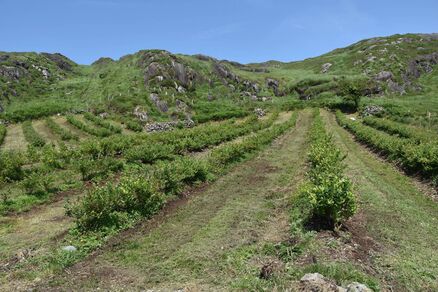 Derry Duff Farm was established by Dr Steve and Claire Collins. There are 2,000 Aronia plants on three acres, and 7,000 blueberry plants on three, rising to six acres..

The main living area of the family home has large picture windows looking out over a sea of green fields and patches of commercial forestry. Swallows are at play, swirling and diving.

“Out there are hundreds of thousands of acres that are non-productive. It’s not a natural, pristine environment – that would have all been wooded at one point. This place is called Derry Duff which means black oak; anywhere I put a drain in on the farm, we hit roots and bog oak. But now it’s all degraded; a few sheep (they stop the trees coming back), but essentially unproductive,” Steve explained.

“Ireland’s not going to be able to ignore a third of its unproductive land, and what I’ve been doing with the berries is looking for alternatives: what can grow here that suits the climate, the soil and is environmentally sustainable? Aronia berries is where I’ve landed.”

“Blueberries are great, but they’re quite tricky to grow. I plant them in the low, sheltered part of the farm whereas Aronia are high up on the mountain.”

Aronia berries are native to North America but grow incredibly well in Ireland. They are drought-resistant, don’t mind being waterlogged, resistant to weeds and can take acidic and alkaline soils – they seem tailor made to cope with an environmental system under stress.

Aside from their adaptability, their nutritional benefits are what has Steve excited. Aronia berries are packed to the brim with polyphenols, plant-based nutritional compounds that are extraordinarily beneficial to human health. The human body cannot produce its own polyphenols, so we must absorb them through food.

“Aronia has the highest polyphenol content of any fruit or veg. People rave about açaí or elderberry, but Aronia has roughly 400mg of polyphenol per 100ml.

“A large epidemiological cohort study of 8,000 people with a very detailed dietary history at baseline were followed for six years. The 20% with the highest polyphenol intake compared to the 20% with the lowest polyphenol intake had a 35% reduction in all-cause mortality and a 50% reduction in cardiovascular mortality. If there was a drug that could do that, it would be worth trillions.”

In short, the more polyphenols we can get, the healthier we will be. The Aronia berries are harvested and turned into a pure organic juice designed to be taken as a once-a-day tonic of 100ml. It’s not sweet; polyphenols are tart, bitter and tannic – think of a very tannic, heavily oaked red wine.

Even Steve admits they’re not very nice, but flavour, when it comes to Aronia berries, is not the driving force here; it’s healthfulness and nutrition. Ever the scientist, Steve seeks to underpin everything with data – evidence that things work, or not – and he has good data that shows Aronia juice can positively impact the effects of chronic metabolic syndrome.

“I used to research starvation in developing countries: set up programmes, treat and research how to better develop new products. Now I’m doing it on developed country health.

“Metabolic syndrome effects a third of the adult population in Ireland now. In America its 35%, and one estimate has it costing the US economy $1.7 trillion per year, or 10% of the US GDP; and it’s only going to get worse.

“The problem with nutrition is we’ve been sold a curved ball: lose weight by restricting calories. But it doesn’t work, for 1 in 5 people only. The way to treat metabolic syndrome is to eat better.

“Aronia slows the breakdown of carbohydrate and the absorption of glucose, improves insulin sensitivity, and protects the cells that produce insulin. Drinking 100ml of Aronia juice halves the main driver of metabolic syndrome – it’s got incredible health benefits.”

The Aronia juice is marketed as Phyterberry. As demand increases and the commercial viability of growing Aronia plants on what would otherwise be considered unproductive land is successfully proven, enquiries from other farmers are coming in.

“Getting people to take Aronia juice creates a demand. If we can get other farms to start growing it, instead of farmers with one or two sheep and dependent on grants, they could be growing Aronia.”

After 35 years focused on social missions, Steve is precious about finding another outlet. Proving that farming these berries can be sustainable and commercially viable is it.

“It’s not my position to preach, I’ve got to show it works and raise awareness. I’ll never tell farmers around here what they should be doing; they know the place so much better than me. 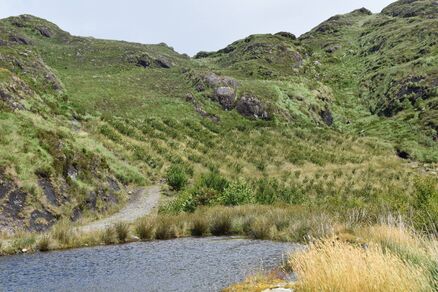 “Farmers might be traditional, but they’re certainly not stupid. They’re looking at what’s happening, and they’re seeing the berries doing well. I’ve got farmers here trying them now, and if they find they grow, we’ve got to create a market for them. If we can get demand, we can buy their berry crop, guarantee a price per kilo. They do the maths and realise they could earn €10,000 per year from that rubbish acre of land; then they’ll start. It’s a long process but it’s moving.”

There are 2,000 Aronia plants on three acres, and 7,000 blueberry plants on three, rising to six, acres at Derry Duff Farm. Steve cultivates 13 different varieties of blueberry, enabling the harvest season to extend from late July to October.

Punnets of the best-tasting blueberries I’ve ever had are for sale fresh or frozen, which extends availability, too. Only a small number of grocery stores stock the blueberries and Aronia juice, but Steve is always on the look-out for new stockists.

Phyterberry Organic Pure Aronia Juice is tart-like unsweetened cranberry juice, with a background herbaceous, slightly earthy flavour. There is a tannic quality from the polyphenols which reminds me of a bone-dry red wine. It’s not sugary sweet, but I personally prefer that in juice.

Derry Duff Farm Organic West Cork Blueberries come in mixed punnets from all 13 varieties and have so much flavour. Some berries are rich, mellow, with an almost toffee-like sweetness, others have a tarter sweetness; most are somewhere in the middle. They are the nicest blueberries I have ever tasted!

“People don’t know what blueberries taste like until they taste ours,” Steve says with utmost pride of his wonder berries.

Manning’s Emporium and Cronin’s Centra in Ballylickey, Organico and Supervalu in Bantry, and Field’s Supervalu, Skibbereen, all stock Derry Duff Farm blueberries when in season. The beautiful berries even grace the menus of Dede in Baltimore and The Chestnut in Ballydehob, two of Cork’s Michelin-starred restaurants. 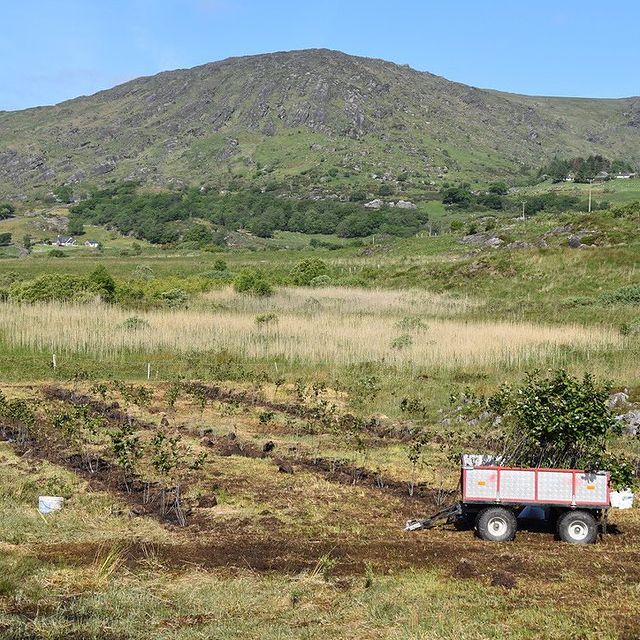 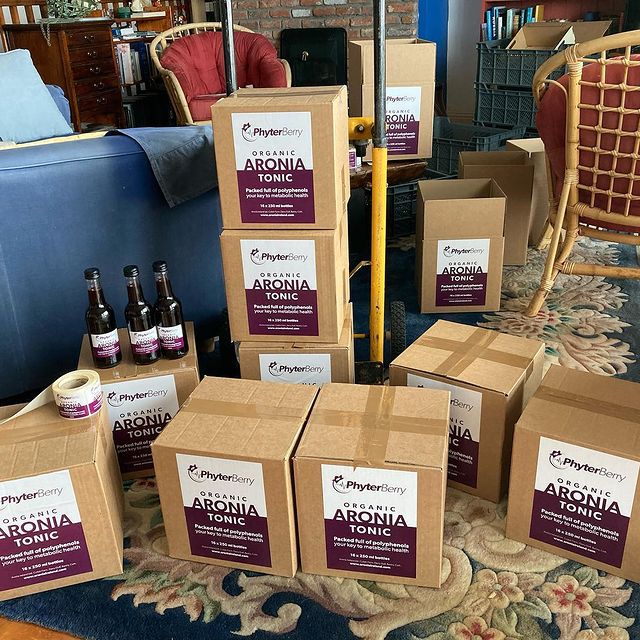 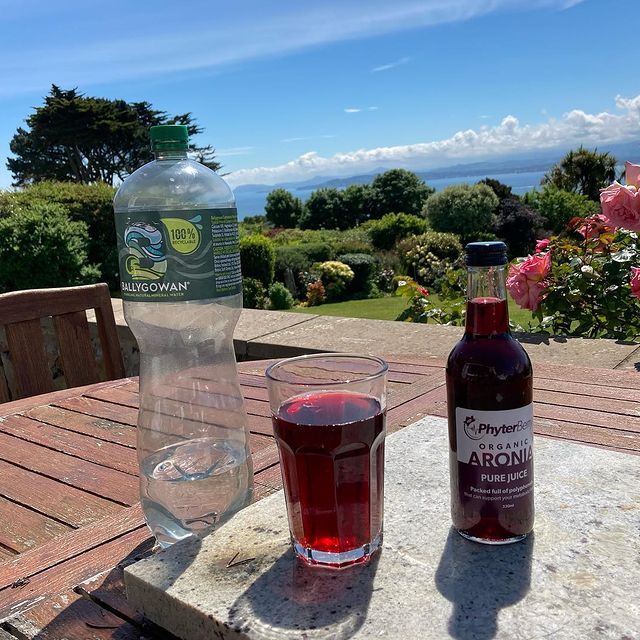 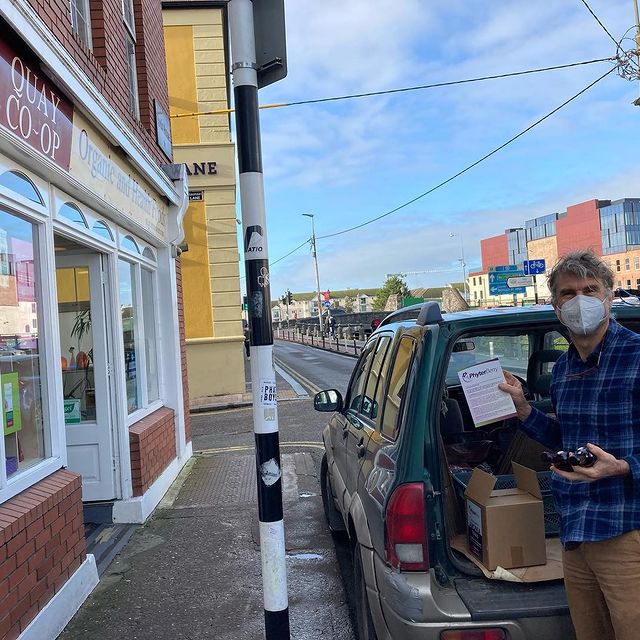 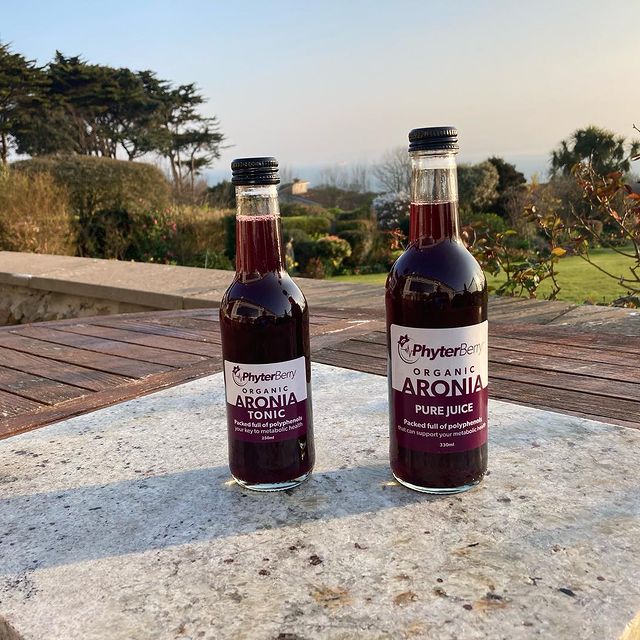 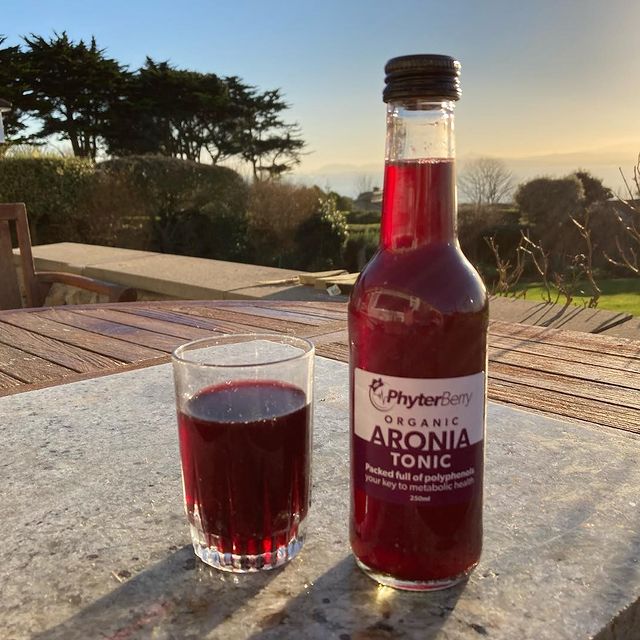 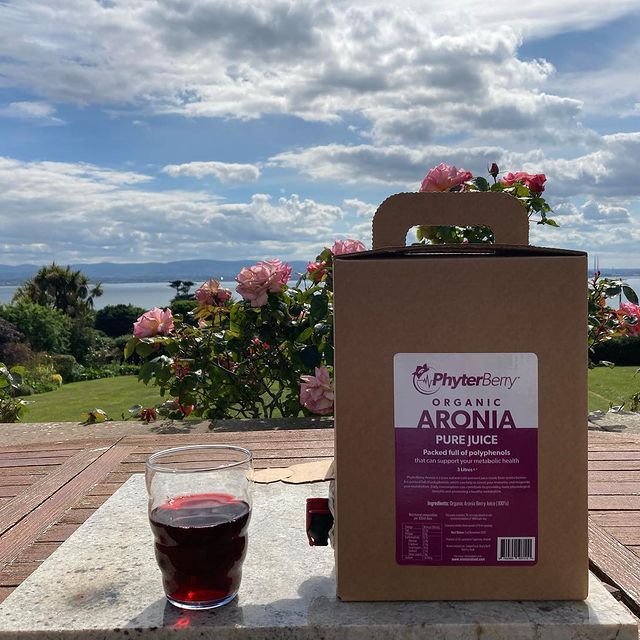 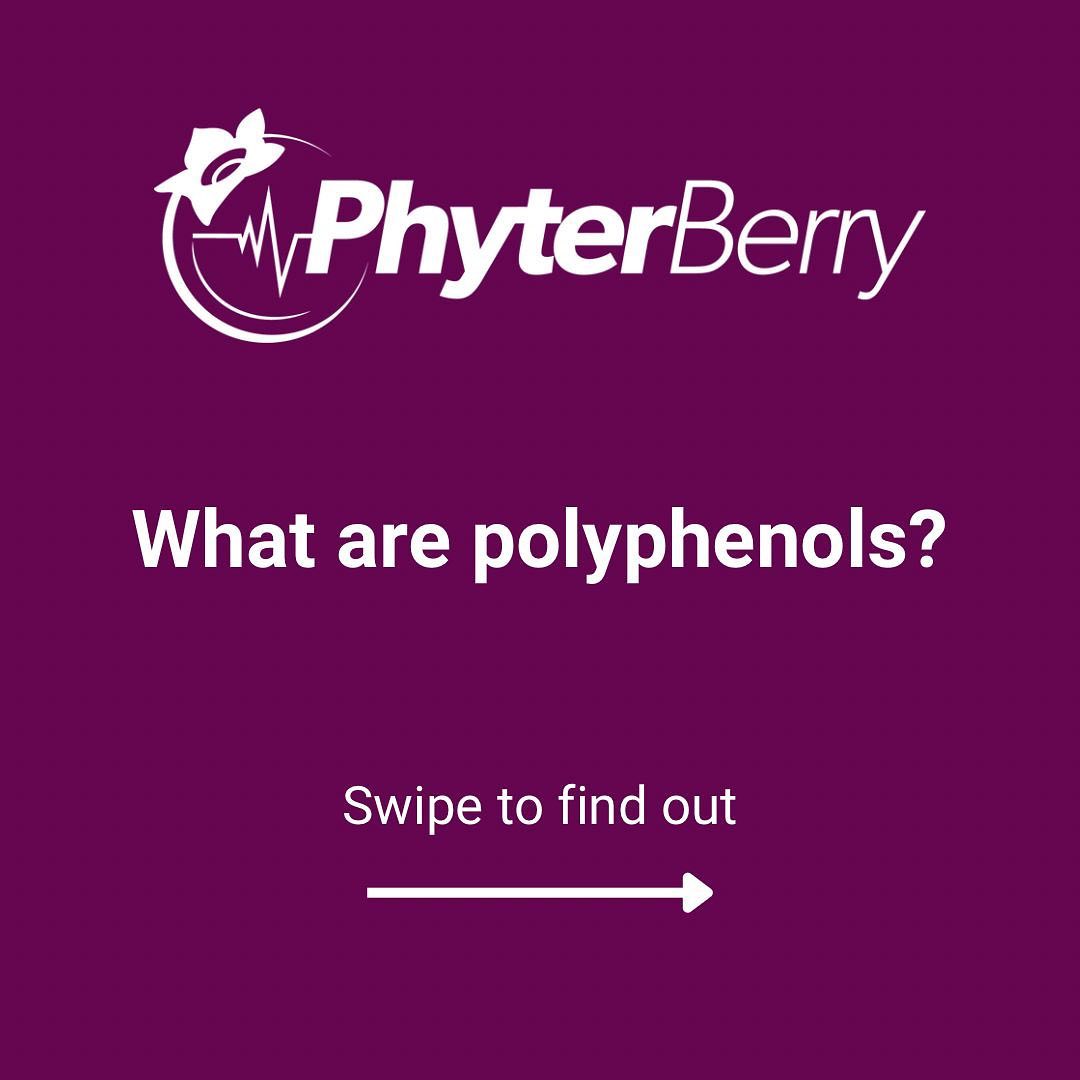 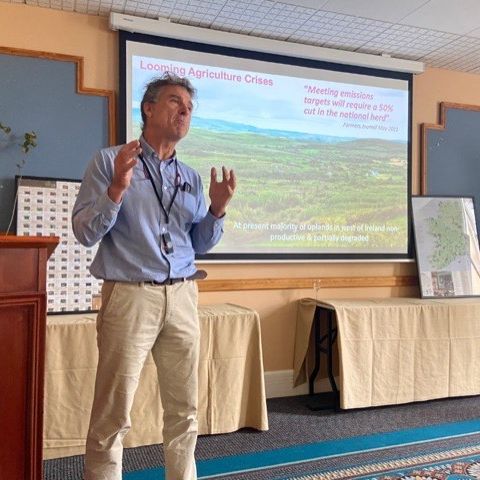